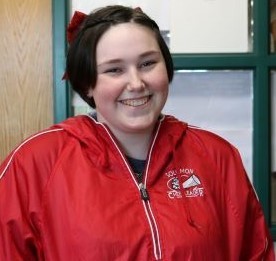 It’s not always easy for Nicole Price to sit still. When she gets animated, she tends to pace and gesticulate, her brown eyes flashing, cheeks flushing pink with excitement. Nicole is outgoing and intelligent, and she speaks of herself with utter honesty.

“If I had any advice for my freshmen self, it would be: Don’t shave your head,” says Nicole.

Nicole is quick to note that she has “zero impulse control,” and says she shaved her head in October of her junior year because of a whim coupled with her desire to show solidarity with an uncle who was suffering from Leukemia.

Although Nicole doesn’t regret the show of solidarity with her uncle, she does wish she had avoided the impulse to shave her head because many people were so unkind.

“I learned that people treat you differently when you don’t have hair,” Nicole says with downcast eyes, recalling the hurt she experienced. “I lost friends. I felt like I had no friends right after I shaved my head.”

Despite the pain of her experience, Nicole did learn lessons.

“I learned that I don’t need hair to be pretty,” said Nicole with a smile. “It actually boosted my confidence. I used to hide behind my hair, but I don’t use it as a shield anymore. It makes me look more professional.”

Nicole possesses a kind of poise rarely found in teenagers and the natural ability to converse with anyone. This skill was honed as she moved around the USA, as the Army stationed her father at various military bases. Nicole has lived in Tennessee, Kansas, Oklahoma, and Kentucky.

“I hated moving around a lot,” she says. “I was always the new kid and nobody wanted to be friends with the new kid!”

Nicole delivers the last line with a laugh, and it’s clear that she has the ability to find humor in most situations.

“I’m not very coordinated when it comes to actual sports activities,” explains Nicole, talking about her involvement with the Solomon High School Cheerleading and Dance teams. “It’s the closest I’ve come to participating in actual sports--cheering for them.”

Nicole’s self-deprecating sense of humor is the product of growing up matching wits with her twin brother Colin. In addition to her brother, she also lives with her parents and sister on a farm.

Living on a farm has taught Nicole much about responsibility and caring for others. The Price farm has 4 horses, 2 goats, 4 dogs, 6 cats, a miniature pig, and 2 ducks. This boisterous environment has greatly influenced Nicole with her post-high school plans.

“I want to study early childhood education,” she says. “I used to hate kids, until last year.”

Nicole would like to attend Fort Hays State University for her degree but may take a year off in order to work and save some money. No matter what she ends up doing, the lessons Nicole learned during high school have made her stronger and more confident.

“I’m more confident in myself as a person,” she says, but admits that “looks-wise” she has a way to go. “Everyone is different and I know it’s okay to struggle with accepting yourself.”