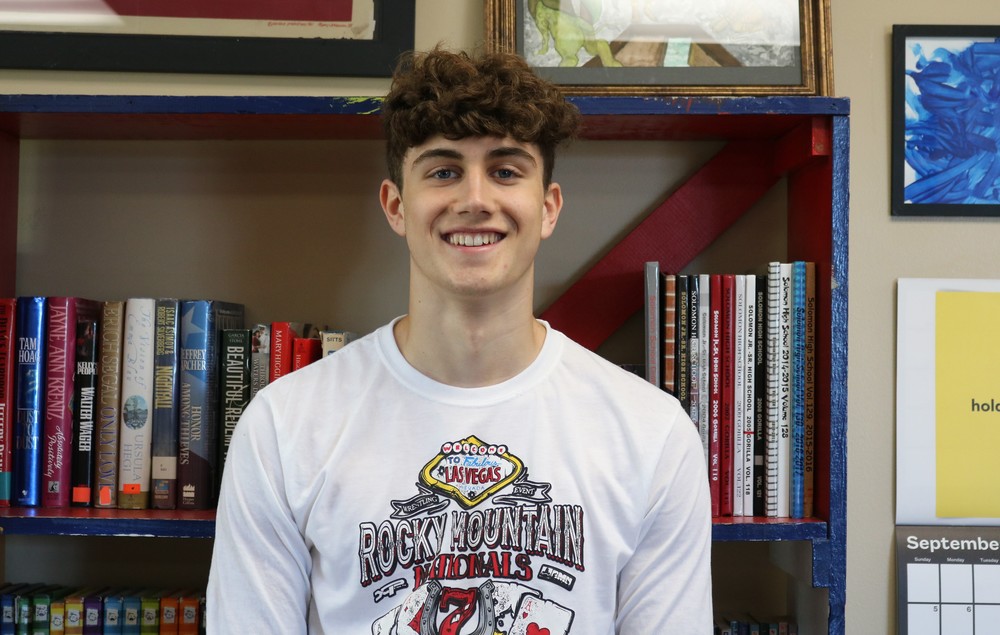 Caden Acosta has a distinct walk. He lopes through the halls of Solomon High School with long strides, a slight rhythmic nod to his head. It’s as though Caden walks to a soundtrack only he can hear.

Music is a big part of Caden’s life, and he has even spent part of a summer on tour with some pretty well-known musicians.

“My dad is the merchandise manager for Lucas Nelson, Willie Nelson’s son,” the senior explains. “They tour together. I have gone on tour once for about two weeks. I made bank.”

This taste of money has influenced what Caden plans to do post-graduation. He is going to attend “probably K-State,” to study accounting and business management, and he intends to keep the bank role flush with cash while in college.

“I plan to go on tour with my dad during the summers,” he says. “It’s a good way to make some money while I’m in college.”

Caden is certainly a student who should seek higher education. With his mass of messy curls, the slightly distracted look that furrows his brow most days, and his enjoyment of abstract conversations, Caden has both the look and penchant for college.

“His hair is natural and I am very jealous of his beautiful locks!” quipped Nicholas Owen, Solomon High School Principal. “But seriously - Caden is a good kid with a huge heart.  He is very respectful and has a great sense of humor.”

Caden is ornery, intelligent, and impulsive, and he can be quite exasperating to those who expect rigid adherence to rules related to timelines.

He’s perpetually running late. At least once a day, he can be seen hurrying through the hall, desperate to beat the bell. He’s usually balancing a seemingly random assortment of papers, books, and electronics in his arms while simultaneously trying to hike his jeans up on his skinny waist.

His distinct walk and flightiness when it comes to schedules aren’t the only distinguishing features of Caden: he can also twist a wicked balloon animal.

“I am in the art of entertainment,” Caden said, explaining one of his jobs. “I also do airbrush and glitter tattoos. I can be a magician’s assistant.“

Caden picked up these delightfully surprising skills working with his aunt, a magician who performs at kids’ parties and business events. Over the years, Caden has assisted his aunt with her business and his skill has taken him to some impressive locations.

“I’ve done these at K-State games,” he says, with a faint note of pride in his voice. “And I’m pretty good with kids.”

The latter statement comes as no surprise to those who know Caden. He’s confident, knows himself well, and he is good with kids. Although, he does say that his favorite high school memory was dunking a basketball on a 3rd grader. To be fair, this was an agreeable 3rd grader who delighted in watching the lanky senior dunk a basketball.

“This happened after Field Day,” he laughs. “I was the yearbook photographer there and afterwards I dunked on an 8 year-old. That photo made the yearbook.”

Despite the impetus to dominate an elementary school child, Caden really does do well with children. He has younger siblings and he comes from a pretty close knit family. In fact, his paternal grandparents live next door to him in New Cambria. An assortment of extended family members live in New Cambria and Solomon, and Caden spends time with them regularly. He has two younger siblings, both of whom attend Solomon Schools. His older sister lives in Salina, and he splits his time between Solomon and New Cambria, living with his mother and father respectively.

When he’s not working or spending time with his family, Caden participates in football, basketball, FBLA, track, yearbook, 21st century journalism, and he hones his business acumen as a founding member of and participant in Big Red T’s--the student driven T-Shirt business.

It was in that student-run business, where Caden learned, under the tutelage of Solomon High School business teacher Zach Douglas, that he wanted to pursue business ownership.

“I don’t want to ever work under anyone until I have to in order to reach my goals,” Caden says. “I really want to be my own boss.”

Caden certainly has the mind, drive, and ambition to one day own a business, and the 2022 graduate is ready to take the world by storm.