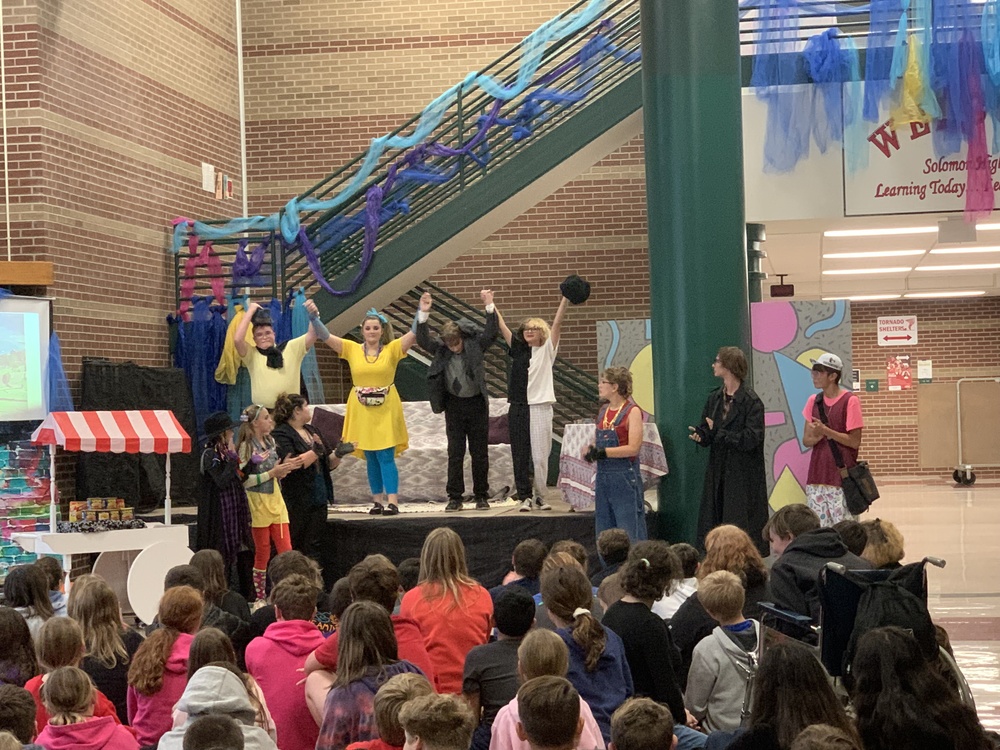 Look at these "Fools"

And the crowd goes wild! It’s another year for the school play. This one is called “Fools” and it’s a comedy.

“After a stressful couple years of school, our return to the stage needed to be a return of laughter, '' said Chris Delay, play director. “It's a very strong comedy that has more jokes per second than Mr. Delay’s class.”

This play, however, won’t be performed on a stage.

“The play calls for us to have an upstairs and a downstairs, and due to an injury with my back I was unable to construct stairs,” said Delay. “We're using the natural staircase in the commons to accommodate our play.”

This has presented some challenges for rehearsal.

“We have had to make sure that we were good neighbors,” started Delay. “We have rehearsed during volleyball games, moved spaces for bond issues meetings, and we have worked different times to work in similar places during cheerleading, but that's all part of the process and about being flexible.”

Even though rehearsal was unconventional at times, the actors used their creativity and talent to make it work.

“Our actors are some of the most imaginative and creative people in the school, and half of my cast had performed online last year which was also unconventional,” said Delay.

Working with really talented actors has been amazing for Delay. Part of the preparation for the play involves props and costumes. This play is set in the 1980s.

“A lot of 1980s fashion has made a comeback, so a lot of our costume choices are gonna look modern, going to be nicer to tie in kids with parents experience,” said Delay.

“Mrs. Pratt has volunteered to step in and costume our show,” said Delay. “Our show is set in the 1980s, so we are using some fairly radical and totally tubular design ideas.”

The play is going to run around ninety minutes with an intermission between the two acts. It was nice to see many people involved with the play.

“I welcome everyone to get involved with theatre,” said Delay. “I don't think there's anything better in your high school career than putting on a show.”

The actors agree with Delay.

“Working with the specific cast members we have is actually really fun and considering that we’re all in the same age group, mostly it’s very easy to interact with each other,” said freshmen Raegen Perry.

“Fools” has become something that goes beyond just traditional theatre.

The play isn’t the only thing happening this year. A dinner theatre is also going to happen before the play. Once Katy Vinson, Solomon High School Family and Consumer Science Teacher, and sponsor of Gorilla Grub, the student run meal preparation business, heard of the play, she brought it up to Delay.

“Well, Mrs. Vinson has great taste so she approached me about putting together a dinner before the play and I tend to think with my stomach so I jumped at the chance to work with Mrs. Vinson,” said Delay.

Vinson is always looking for opportunities for her Culinary and Event Planning classes.

“I am always looking for an opportunity for Culinary and Event Planning class to practice what they learn,” said Vinson.

“Event Planning in particular, we talked to Mr. Delay about the play so we could match the play, and we started to look at dress and decorations from the 80s,” said Vinson.

While that was being figured out, Vinson talked to her Culinary class about deciding on the menu.

“I just put it to my Culinary kids,” Vinson said. “They had to consider what equipment we have and what we can do. They had to stay within the budget.”

They decided on some basic traditional food. The Event Planning students also planned the service. Part of the service is seating.

“People are going to make reservations,” Vinson said. “Cassette tapes with names on it will be placed at tables.”

Some might wonder what the attire is to this dinner theater.

“Wait staff is dressing in 80s clothing,” Vinson said. “Attendees can wear whatever.”

Vinson hopes that the dinner is a good experience and helps highlight the play.

“It’s just a really good experience with the kids,” said Vinson. “It helps to highlight the play.”