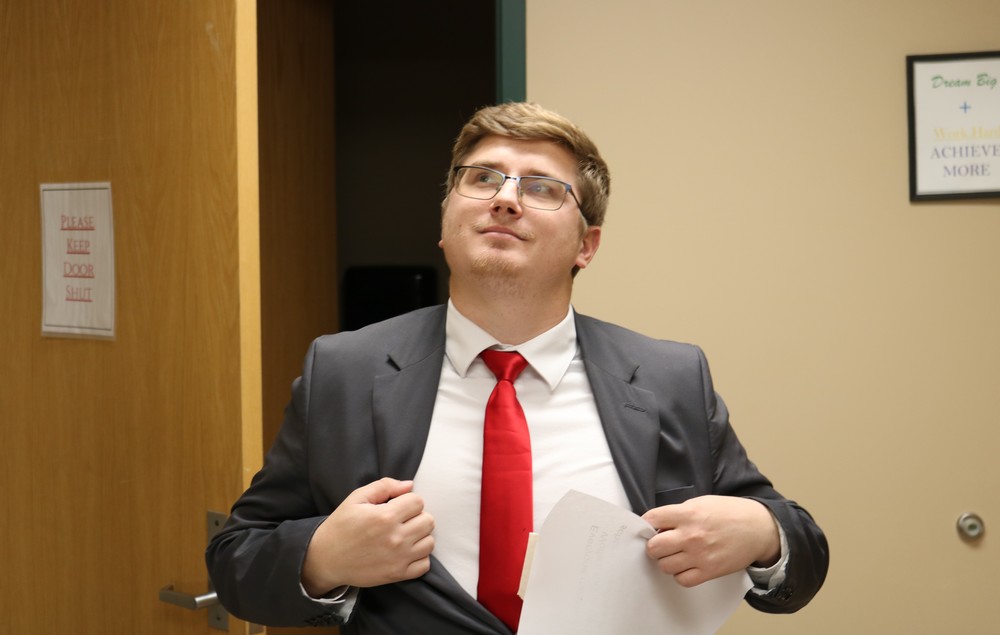 Austin Wolfe has been a great new addition to Solomon Elementary, his bright young soul has brought the staff mounds of joy with his eccentric streak and sense of humor. Even Superman has nothing on him, for Halloween Wolfe dressed in a full blown Superman costume and pulled it off all day in complete confidence.

Wolfe, 24 years-old, grew up in the small town of Nortonville, in the northeast part of Kansas. After graduating from Jefferson County North (Nortonville) High School he attended Fort Scott University for a year and a half, eventually leaving to attend Bethany College in Lindsborg, from where he graduated.

In turn, Wolfe is teaching P.E. to the preschool students. Yet his primary job is teaching K-5th grade STEM (Integration of science, technology, engineering, and mathematics) class because he previously taught science at a school in Brooney, Texas. Thanks to a professor at Bethany and the Kansas Teaching Jobs website, Solomon now has this great young man to lead our young Gorillas in the ways of science. In fact, Wolfe has been sharing his science teaching prowess with other teachers.

"Co-teaching a class with Mr. Wolfe has been beneficial on multiple levels,” said Zachary Douglas. “Mr. Wolfe has been co-teaching MS STEM with Mrs. Befort and I this year as we tackled filling the STEM void left behind by the departure of Mrs. Brubaker. He has been splitting time between both of our classes and has been helpful in being able to give more one-on-one instruction with students. We have been able to accomplish more in both classes because of his ability to help with the class. On another level, he was able to keep the class running smoothly while I had to attend physical therapy twice a week for the majority of 1st semester at the end of the day. His help with the class has been great.”

Not only can Wolfe teach in the classroom, but he can also teach on the court.

Wolfe has carried his coaching career in Solomon as an assistant coach for the middle school football team and is now working with the middle school girls’ basketball team as their head coach. His optimism and enthusiastic attitude carries into coaching, he’s made many investments for the sake of sports inside and outside of Solomon Schools. Those investments include time spent at football camps over the summer and helping out during Friday night lights each week with Solomon’s varsity football team.

Mr. Wolfe has started his career in Solomon well; his reputation just keeps getting better by the day due to a positive attitude and his innate ability to express himself in the best of ways. Wolfe said his dream job is to become a college basketball or football coach and as of right now he is headed in the right direction, coaching the middle school girls basketball, helping out with both of Solomon’s middle and high school football teams, and meeting the right people that will lead him on to become a more successful man than he is now.