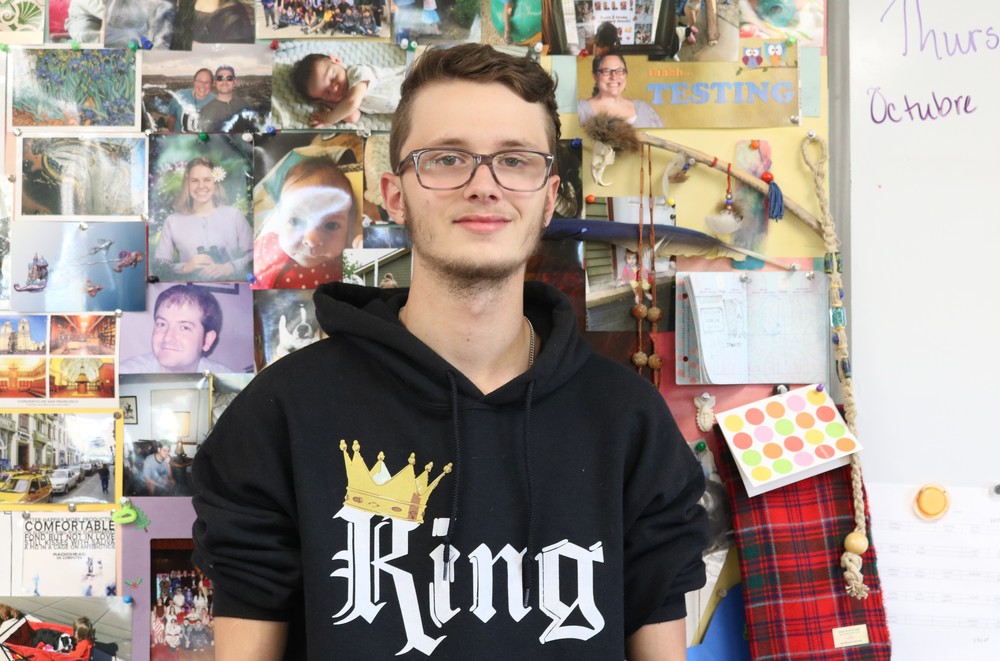 They can be hard to see because they’re often obscured by his marbled grey framed glasses, but if time is taken to really look, his warm brown eyes reveal a helpful, kind, and open-hearted disposition.

Joe is always quick to offer aid or advice, and this probably stems from the fact that he has made a lot of mistakes.

“I want to be remembered as the kid who kind of screwed up a lot, but still came through,” said Joe. “I made a lot of mistakes, but I want to finish strong.”

Joe is driven to finish high school. He is motivated to become the first person in his family to graduate. Additionally, he wants the bragging rights that will come from being the first of his siblings--he has two sisters and two brothers--to graduate.

“I want to go on and be something else--other than a high school drop-out who makes minimum wage,” Joe said.

He has become someone he can be proud of. He participated in basketball and track during his time at Solomon High School, he is generally the first to volunteer for difficult tasks, and he has worked various jobs for years.

Joe takes pride in the fact that he has never taken hand-outs and he currently works at Kohl’s to provide for himself. He thinks his helpful nature stems from having to make his own way from a young age.

“I have never wanted to see other kids have to struggle to get what they want in life,” Joe says introspectively. “I always want to see people do the best they can--not to be at their lowest.”

Joe admits that he sometimes resents people who get things handed to them because too often, people tend to take things that are unearned for granted.

“I think having to work for things made me stronger,” Joe says. “I always had to fight for what I wanted. I’ve always had to work to get places in life.”

Although he has made mistakes, Joe is wise enough to view the events of his life as learning experiences. He realizes that as an underclassman, he didn’t always make the best choices when it came to friends, and this often got him into trouble. He realizes that he often hung out with the “wrong crowd,” but knows that his strength of character is what helped him to keep moving forward.

"Throughout the 4 years I have known Joe at Solomon he has matured and gained insight into the bigger picture of the real world,” said Zach Douglas, Solomon High School Business teacher, who has also had Joe in his study hall class for years. “That insight has allowed him to focus his attention on tasks that will most benefit him in the future beyond high school."

Joe already knows exactly what he wants to do post-graduation.

He plans to be a welder and would love to one day work for Great Plains Manufacturing.

"One thing Joe should take pride in is that I believe whatever he sets his mind to after high school he will be successful at,” said Mr. Douglas.

Joe knows that he would like to one day live in the country because there is “too much drama” in town, but he says that there are parts of high school that he will miss.

“My favorite part of high school was always Mr. Daily’s nature walks,” Joe says with a smile. “Daily just kind of runs through the neighborhood, teaching us about things--it’s not what we expect from a regular day in class.”

Joe knows that he only has a few more months to enjoy nature walks and to exhibit his helpful disposition. A look into Joe’s kind eyes shows that [he] “just wants to be happy.”