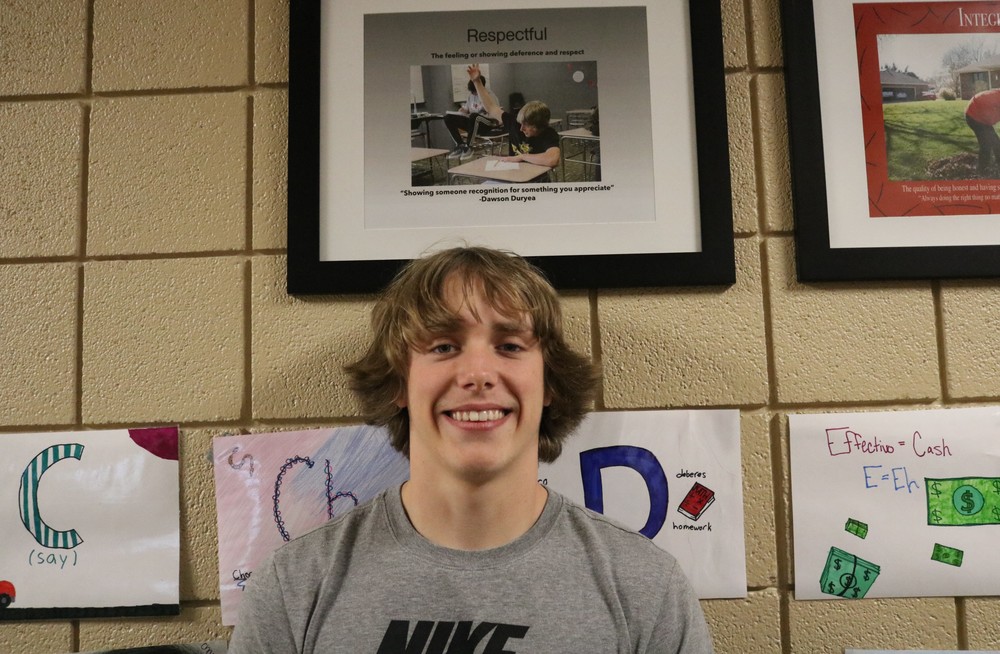 It is unlikely to make it far in the halls of Solomon High School without hearing Dawson Duryea’s voice. During passing periods, his bass tone reverberates off of the bricks, sending echoes of enthusiasm throughout the building. His personality is large, his voice loud, and his energy that of an exuberant puppy.

Often, loud people deny themselves the opportunity to listen. Sometimes, those with large personalities overlook the lessons gained through allowing others to occupy space. Rarely do teenagers have a well honed ability to self-reflect.

But to label Dawson as having any of these shortcomings is an unfortunate mischaracterization that denies the depth of his complex temperament. He’s a seemingly endless well of empathy, a rare quality in a day and age where all too often selfishness, destructive competition, and ruthless egotism are qualities that garner the most reward. He’s a wise soul with a naturally cheerful disposition; a ball of energy with an ornery streak. He’s the walking embodiment of joie de vivre and his boisterous exuberance can buoy the mood of any room.

Dawson’s innate ability to put others at ease--and his natural power to brighten anyone’s day--makes him indispensable to a school’s morale. Friday mornings for the rest of the boys’ basketball season will find Dawson, along with the rest of the team, greeting students as they enter the doors of Solomon Schools. Aside from allowing the team to recognize that younger kids look up to them, the boys are there to provide a warm welcome to students to end their weeks on a cheerful note. Boys’ basketball coach Kyler Stein implemented the program and this is the perfect job for Dawson.

In addition to basketball, Dawson participates in football, basketball, track, and FFA. He also finds the time to practice his excellent work ethic working on farms.

“Dawson helped us here on the farm all summer, “ said Delos Brown, who handles transportation for Solomon, and someone who has been a fixture in the building for years. “He did everything we wanted him to do. He was perfect.”

Judy Brown, Delos’s wife, had nothing but glowing things to say about Dawson.

“He is just special,” she said. “I don’t know any other way to say it. His smile and his attitude will melt your heart. You don’t see kids like that today. He is just so polite. He did everything we asked of him and he would ask questions if he didn’t know how to do something.”

The Browns have employed many people on the farm over the years, but none quite match up to Dawson.

“We’ve never had another kid like him,” Judy said.

The work ethic that Dawson has exhibited throughout high school is reflected in his core beliefs and what he would like his legacy here to be:

“It doesn’t matter how you grew up or what happened to you,” Dawson says. “You can be as successful as you want to be.”

Dawson credits his family members with teaching him just how important networking and personal connections are and that these are key components to success and happiness. Dawson, who is close to his family, has seen several family members achieve more through treating others in an open and nonjudgmental manner.

“It’s really important to show people respect, and they will show you respect,” Dawson says.

As simple as that lesson may be, it is one that many people never learn, despite the length of their lives.

And Dawson is wise enough to understand that learning should be a life-long process and it’s something he values. When asked what he would change if given the chimerical opportunity to have a “do over,” for any point in his life, Dawson responded with a thoughtful and sage manner.

“I don’t want one,” he began. “It wouldn’t be the same... When you mess up, you learn from it. If you’re given a “do over,” you don’t get the same opportunity to repeat a mistake or an experience, and then you can’t learn from it. You wouldn’t truly understand the gravity of the lesson you can learn from the mistake.”

It’s a shame that Dawson is a senior because he’s a rare individual who will be sorely missed. But, until mid-May, the halls of Solomon High School will ring with the echoes of Dawson’s energetic voice and his constant reminder that any day can always be brightened. As Dawson says, when greeting younger students on Friday mornings, “It’s a great day to be a Gorilla.”